Florida expected to be hotbed for wildfires in early 2023

The ingredients are aligning for parts of Florida to be active for wildfires in 2023, despite two hurricanes making landfall in 2022, leading to torrential rainfall.

Outlooks recently released by the National Interagency Fire Center show the probability of above-normal wildfire potential to grow in the new year along the Interstate 10 corridor and include the northern Peninsula and Southwest coast in the spring.

The threat of active wildfire weather is also expected to expand northward along the I-95 corridor and impact the coastal plains of Georgia, South Carolina and North Carolina.

Around 80 percent of the country is experiencing either abnormally dry or drought conditions, but due to long-range climate outlooks, forecasters are able to hone in on areas where the upcoming months do not look promising for drought relief.

The Sunshine State is no stranger to droughts or the problems they cause.

Emergency management reports the state sees around 4,000 wildfires every year that destroy about 200,000 acres.

Severe drought conditions currently exist throughout much of the Florida Panhandle and is expanding each week.

During a severe drought, the US Drought Monitor says crop losses are likely, water shortages are common and water restrictions are imposed.

Communities experiencing these conditions include Pensacola, Panama City and Tallahassee.

With the state entering its normally driest months, drought conditions will undoubtedly expand and include parts of the Peninsula and nearby southern states.

The National Oceanic and Atmospheric Administration’s Climate Prediction Center has highlighted these areas to see additional drought development through at least February 2023. 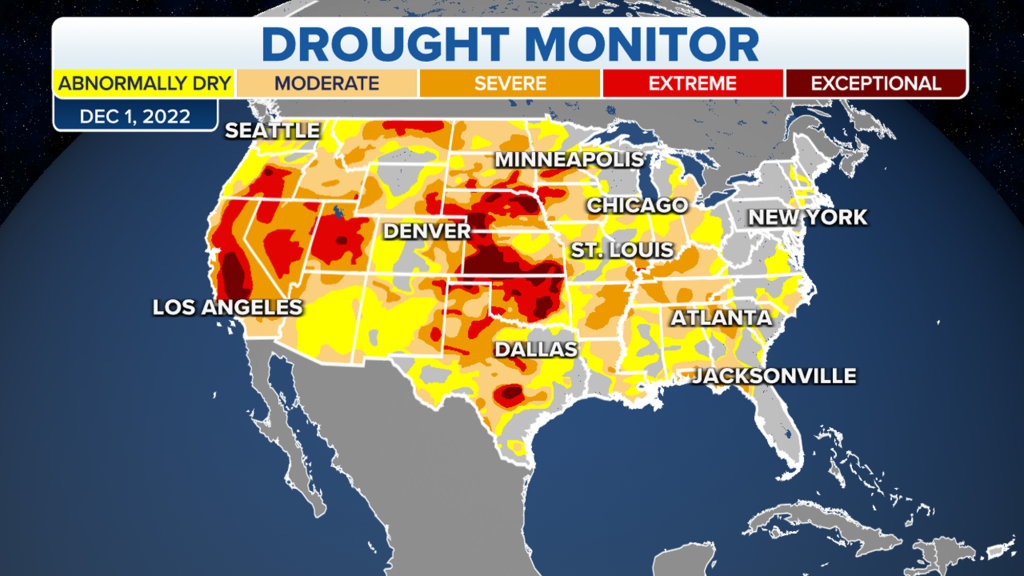 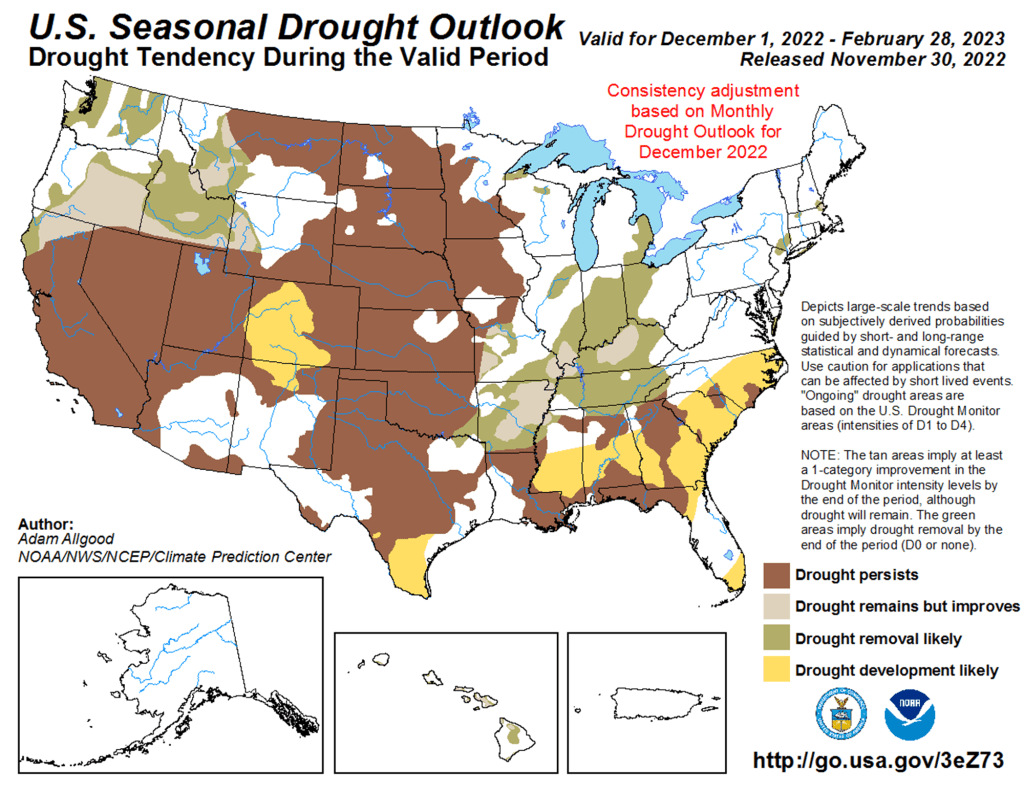 The world is currently experiencing a rare “triple-dip” La Niña, which is expected to continue well into 2023.

During a La Niña, periods of abnormally warm and dry conditions are common across the Deep South during the winter and the spring.

The combination of already dry conditions and an expected lack of rainfall is expected to exacerbate fire threat levels until a significant weather pattern change allows enhanced rainfall opportunities in the Southeast. 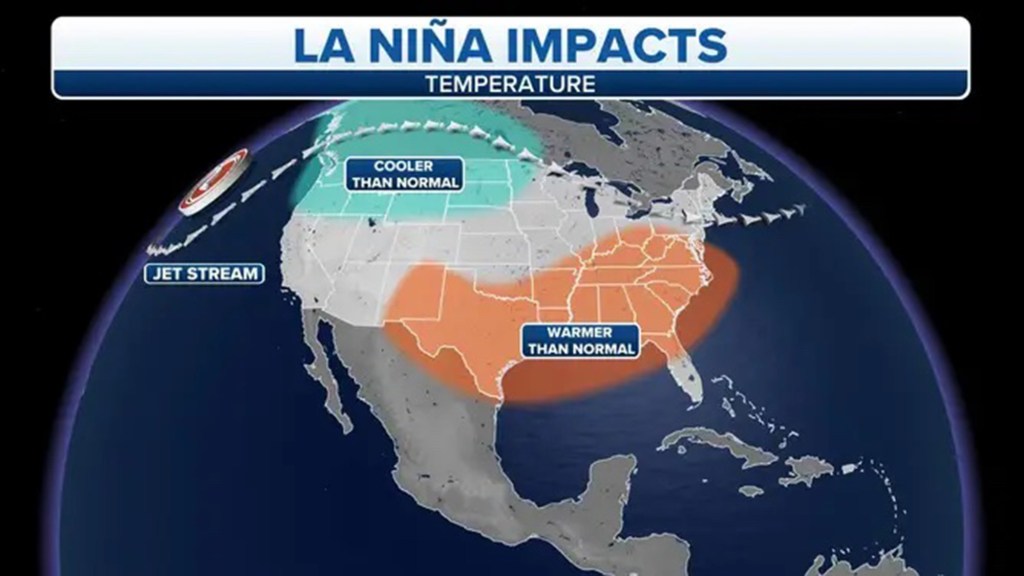 The Sunshine State did see heavy rainfall during Hurricanes Ian and Nicole, but the precipitation occurred in brief periods, and the entire state did not reap the benefits.

Tropical rainfall was just enough in some communities to send rain gauges back to normal and keep cities from experiencing drought conditions. 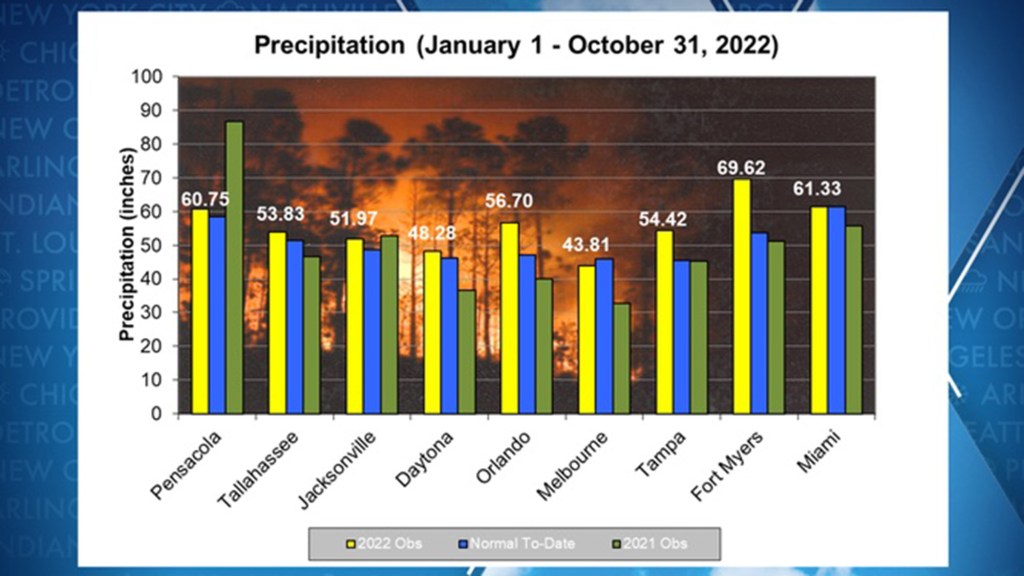 As the evaporation continues and the storms become a memory of the distant past, the National Interagency Fire Center is concerned that impacts on vegetation could play in an active fire season.

“Several agencies have expressed concern that salt-cured fuels associated with Ian’s historic storm surge could easily burn at any moment. Because of this and the likelihood of drought development this winter, southwest Florida is included in above normal potential for February and March,” authors of the NIFC outlook wrote.

Tropical cyclones are known to have lasting impacts on fire weather in the Southeast.

Hurricane Michael made landfall in the Florida Panhandle in 2018 and toppled millions of trees.

The dead vegetation, in combination with drought conditions, caused the perfect storm for rapidly spreading wildfires in 2022.

Numerous large fires broke out between Pensacola and Tallahassee, and firefighters said they had a tough time controlling the flames due to the dry brush.

While the terrain where the most recent hurricanes struck is different than in the Panhandle, the lasting impacts from the storms will be an element firefighters will be monitoring throughout the fire season.