Elon Musk and Twitter: Is he in over his head?

Twitter may not be the biggest social media platform out there, but it's certainly one of the most influential, because what happens on Twitter doesn't just stay on Twitter. Which might be why the world's richest man, Elon Musk, is such a fan.

Musk bought the company for an eye-popping $44 billion, despite the fact that Twitter, which relies on advertising for much of its revenue, has turned a profit in only two of the last ten years.

Tech journalist and podcast host Kara Swisher harked back to businessman Victor Kiam advertising Remington electric shavers: "There was an old thing, 'I liked the shaver so, I bought the company.'"

Since his takeover, Musk has fired, or accepted resignations from, about two-thirds of Twitter's staff. "He thinks he can reform it," Swisher said. "If you looked at it as a business, you'd have to say, 'No, no, stay away from this.' But it's sort of like buying a yacht or a baseball team for a rich person. This is interesting to him."

Swisher has known Musk for over 20 years and has interviewed him extensively. Lately though, he hasn't been such a fan of her coverage of him.

There was a time when you cared about the truth. That is long gone.

Since buying Twitter, Musk (a self-proclaimed "free speech absolutist") has invited back some users who had previously been banned or otherwise restricted. He's fired employees who have tweeted criticisms of him, and he posted (and then deleted) what one commentator called "the most expensive tweet ever": a conspiracy theory about Nancy Pelosi's husband. Expensive because there's speculation that that tweet, and many others from Musk, have caused advertisers to flee Twitter in droves.

A documented rise in hate speech since Musk's takeover came to a head this past week after the rapper formerly known as Kanye West tweeted a photo of a swastika, prompting Musk to suspend his account.

Swisher said, "Anything that's more moderated – and I'm using word 'moderated,' not 'censored' – tends to do better with users, with advertisers, with the entire experience."

Alex Stamos, the former chief security officer at Facebook, says the Russian hacking of Democratic National Committee emails in 2016 made Twitter wary of foreign influence campaigns. "In the days before the 2020 election, Twitter made the decision to not allow people to post the New York Post story about Hunter Biden's laptop until they could try to figure out whether or not that was part of a government influence campaign," he said. "And then they decided, since it was going to get covered, that they should allow it to be posted. So, they did make a mistake. But the idea that it affected the election is just ludicrous."

For some, Twitter's suppression of that article became a First Amendment issue. But Swisher thinks that misses the point: "It's gotten sucked up into a free speech conversation or First Amendment conversation, largely by people who've never read the First Amendment. Because it's about 'government shall make no law.' That's all it says, folks. And so, companies certainly can, and they certainly do."

And speech on Twitter can have real-world implications. For years, Twitter's "blue checkmarks" have verified that a user is who they say they are. But when Musk started selling the checkmarks without actual verification, a slew of imposter accounts sprang up, like one posing as Eli Lilly tweeting out "Insulin is free now," causing the pharmaceutical company's stock price to tumble. In fact, due to security concerns, CBS News briefly paused its Twitter use two weeks ago.

One current Twitter employee who spoke to "Sunday Morning" asked that we not identify him, for fear of reprisal from Musk and his online fans.

"He said that he wanted to experiment with long-form content, content longer than just a tweet," he said. "That was already launched and was available on the platform. And he fired the team that had developed it and launched it."

Burbank asked, "What is your employment status with Twitter as of right now?"

"I'm still technically an employee, but I'm on a suspended status until January 4th, when they will put us on severance, if we sign a severance agreement."

Like many, this un-named, soon-to-be ex-employee believes Musk is trying to reduce what he owes former Twitter staff, in terms of severance and stock options. "And to be clear, Elon Musk bought the company. He can make any business decision he wants to make," he said. "It's the nature in which we were let go and potentially even ways that broke employment law. And it's the hostile and almost cruel manner in which we've been let go in terms of no communication, no direction."

In response to a proposed class-action lawsuit brought by its employees, Twitter has said in court that allegations it broke U.S. employment law are baseless.

Stamos said of Musk, "He's actually a really bad manager, and that's kind of shocking to me, how bad he is at the human management side of this. The odds of them being able to execute well over this next year, I think, are very long, unless he decides to bring in a CEO to calm things down. And it's clear that's what he's going to have to do at Twitter if they're going to try to stabilize and stop the bleeding of all of this talent that they need to be able to execute."

"Sunday Morning" reached out to Musk, but did not receive a reply.

Burbank asked Swisher, "How does he strike you as a person?"

"Oh, it depends on what day," she replied. "I sometimes think of Silicon Valley as a lot of smart people working on stupid things, and Elon was working on smart things."

Things like Tesla and SpaceX, Musk's companies that have arguably revolutionized life on this planet.

But before all that, in 1998, on "CBS Sunday Morning," correspondent Rita Braver talked to then-27-year-old Elon Musk, who was working at his first startup, Zip2, a city guide on a new thing called the internet. Musk said, "There's a level of freedom on the internet that really doesn't exist anywhere else. And there's no central controlling entity that gets to decide, 'This content is good, this content is bad.'" 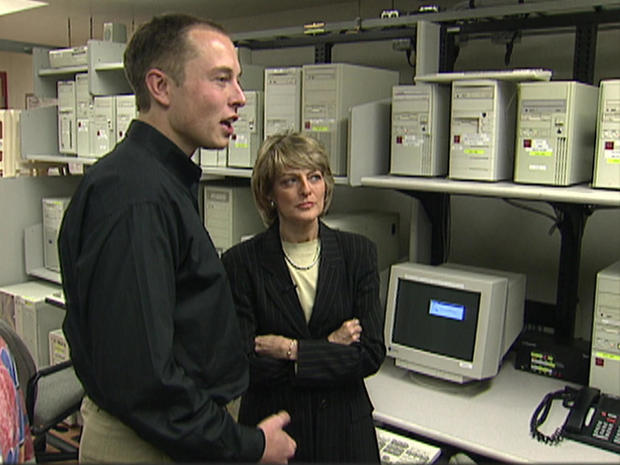 Correspondent Rita Braver at the offices of Zip2 with Elon Musk, who was its chief engineer and co-founder, in 1998. CBS News

But now, Musk is that controlling entity, at least when it comes to Twitter – free to moderate or to allow the spread of misinformation as he sees fit.

One person who understands Twitter's power? That anonymous Twitter employee, the one who may soon be downsized by The World's Richest Man: "Whether it's local to national politics, whether it's the conversation around important cultural events or cultural issues, whether people use Twitter or not, their lives are shaped by what happens on Twitter."

Thanks for reading CBS NEWS.